Subscribe our newsletter to get latest news and updates.

I found your site easy to move around and get the information I need. Well done!! I think this site is tops and I want some more information on your great company.

I found your site easy to move around and get the information I need. Well done!! I think this site is tops and I want some more information on your great company.

Today’s post is about the distinction between two mainstays of public speaking:  the lectern and the podium.

A lectern is a raised, slanted stand on which a speaker can place his or her notes.  “Lectern” is derived from the Latin word lectus, the past participle of the verblegere, which means “to read”.  The word “lecture” comes from the same source.

A podium (pl. podiums or podia) is the raised platform on which the speaker stands to deliver his or her speech.  “Podium” is derived from the Greek word (pothi) which means “foot”.  The word “podiatrist” (foot doctor) comes from the same source.

There are tabletop lecterns and there are standalone lecterns.  They come in all sizes and made from different materials. 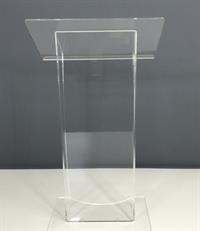 It is important to make the distinction between a lectern and a podium.  And yet, many people say “podium” when they are actually referring to a lectern.

Some might say that I am just nit-picking over semantics.  But suppose you’re giving a speech.  You phone the event organizer and ask if there will be a “podium” when you actually mean a lectern.  If the organizer is not on the same (incorrect) wavelength and says “No”, you might end up needlessly scrambling to find your own lectern.  If the organizer says “yes”, you might arrive to find a real podium but no lectern.

To summarize:  You stand at or behind the lectern and you stand on the podium.

Here is a photo of President Barack Obama and former Australian Prime Minister Julia Gillard standing on a podium and standing behind our Senator Lecterns.